Chance was my first thoroughbred. My first horse was a quarter horse, and my second horse was a Hanoverian. Then came Chance, and now Flynn. And you know, I am not sure I’ll get other breeds. I mean, I’d never say never but I am officially obsessed with thoroughbreds.

Over the past almost nine years that I’ve owned Chance, there times when I wanted another thoroughbred and times where I swore up and down that I would never get another one. If you have been reading this blog a while, you know that Chance has really given me a run for my money. He has been the most challenging horse I have ever sat on. Owning him has been a bit of a roller coaster. When I first started horse shopping this year I was looking at quarter horses. I wanted something calm and gentle, that I could have fun on. Somehow though, I started looking at off-the-track thoroughbreds and began to get the feeling that there were some calm ones out there. Many I saw online seemed like they could be what I was looking for. However, Flynn was local so he was the first thoroughbred I tried and I was sold. I was so nervous the first time I rode him. He was a new horse, and I knew he would be green, so there was that. He was also at a big boarding facility, so I tried him in front of many other people while riding in a ring with quite a few other riders. Now, I used to board and horse show. Back then, I rode around other people all them time. It had been a while though since anyone besides my parents had seen me ride, and I became super self-conscious. It was also my first time jumping in about three years. Ha ha, I still can’t believe I jumped a new and green horse after not jumping for that long! I felt safe on Flynn though. Though I was nervous, he was not. He felt green, sure, but he also felt like he wouldn’t do anything bad. He has a very gentle way about him.

Since bringing Flynn home, he is still pretty chill. However, he is still very sensitive like Chance. If I move too quickly while grooming him, he gets jumpy. If I use too much leg while riding, he shoots forward. I have never considered sensitivity a bad thing though, I actually prefer it. Flynn doesn’t have Chance’s edge, or aggressive streak (from what I can tell so far) but I would say he is every bit as sensitive. I think that thoroughbred sensitivity is what turns so many people off of the breed. They can be more reactive, and they remember everything. A bad experience seems to stay with them longer than other breeds. However, this sensitivity can work for us riders. Being more responsive and reactive can mean they take less leg, lighter bits, and less equipment overall. And once you earn their trust, you can have a bond with them like no other (in my opinion). They do make you work for it sometimes though.

It also fascinates me how versatile they are. They can excel in so many different disciplines. Racing, obviously. Eventing, hunters, jumpers, barrel racing, polo, just to name a few! They can do just about anything, which is why it baffles me how many end up in kill pens at the end of their racing careers. Even many racehorses with career-ending injuries can go on to do other things. There are disciplines that are not as hard on them. There are also many riders who just want to have fun, and don’t necessarily need a horse with 110% clean legs or the ability to jump five feet. I think there is a common misconception in the horse world that if the horse isn’t going to be at the top of whatever discipline it is in, it is useless. At least, this is the vibe I got while on my horse shopping adventure. This is such B.S. though. Not every rider wants to make it to the top. Very few riders can afford to make it to the top – at least in the hunter jumper world. I think we should stop writing off every horse that isn’t perfect, and really sit down and think about what our goals really are; as well as what we can realistically accomplish.

I also think taking chances on thoroughbreds can be what myself and so many other “poor” equestrians have been looking for. Warmbloods are far out of my reach, financially, at this point in my life. Thoroughbreds, however, are far more feasible. There has been talk the past few years, in the social media world, about how the equestrian life should be made more attainable for those of us without trust funds. But really, I think some solutions have been right in front of us. For one, learning to ride thoroughbreds. And heck, I’ve seen some nice quarter horses and appendixes with jumping talent for far less than warmbloods as well. Maybe these “cheap” horses won’t go and win flat classes at Devon against all the six figure warmbloods, but just because a horse came from the race track instead of Europe does not mean it has no chance of being competitive!

You can probably expect to see more thoroughbred posts from me from here on out because I am officially obsessed with them! Or I guess you could say, I am once again obsessed. I remember when I was a little girl, and I found out than many retired racehorses end up in bad situations, I really wanted to help them. I even dreamed of one day owning a farm where I would rehabilitate, and rescue retired racehorses. Who knows, maybe one day I will. Never say never. 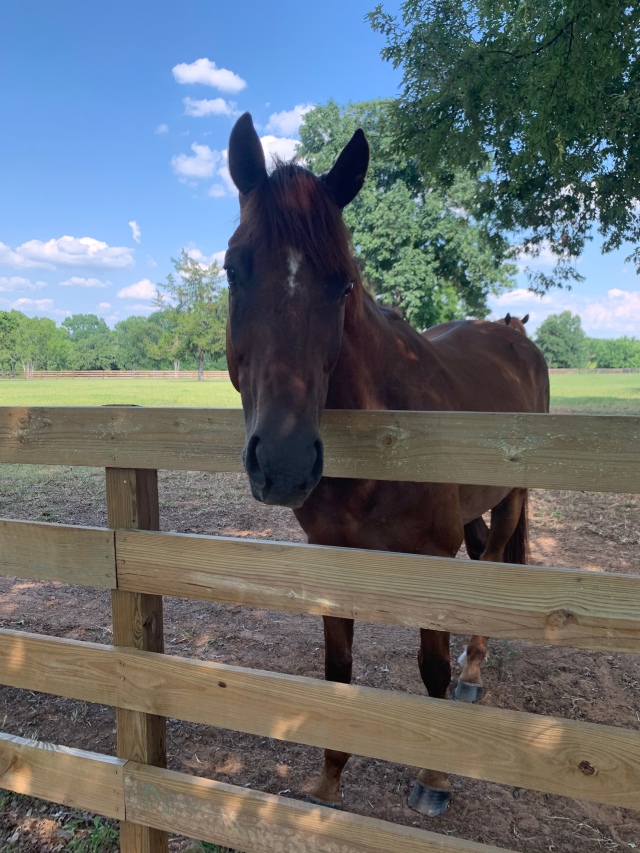